Posted by Sarah Mitchell on 12th September , 2019 in The Write Fit
Share this

This is an excerpt from the second edition of The Write Fit, a fortnightly newsletter from Sarah Mitchell and Dan Hatch at Typeset.

I’ve been at this a long time, long before anyone was calling it content marketing. In 1994, I would have called it “a panicked attempt to make a huge sales quota, using any device possible”. It worked and I’ve been a diehard fan ever since. That’s usually what convinces us, right? If something helps us meet a goal or make money, we’re sold.

CMWorld is an annual opportunity to realign my efforts and refresh skills that have veered from the path of best practice into the wreckage of good intentions. Robert Rose, Chief Strategy Advisor at the Content Marketing Institute, is the person I’m most interested in hearing from because he’s always about five steps in front of the rest of us. 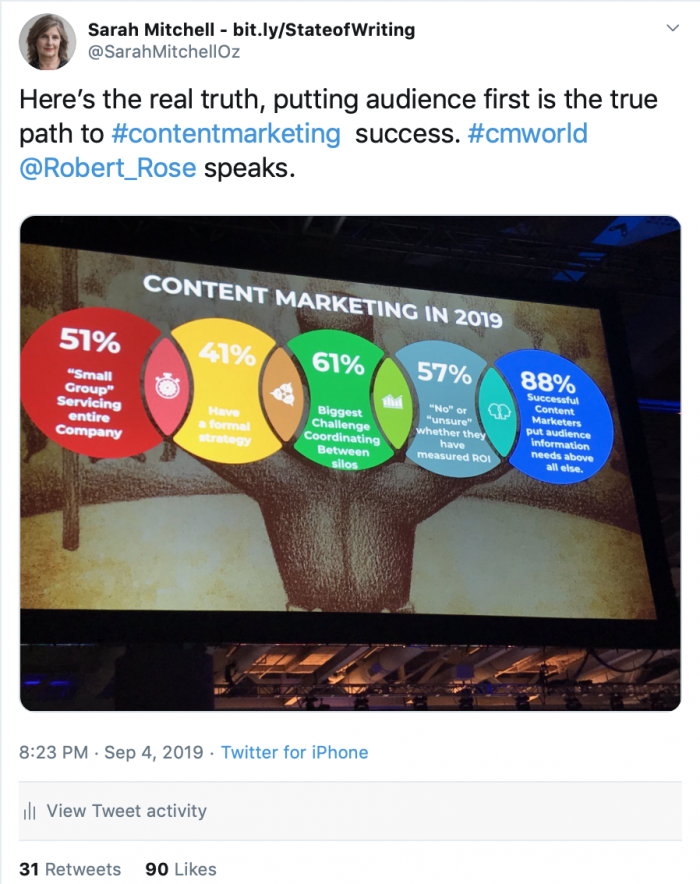 This year Robert revealed early results of new research into the state of content marketing in 2019.

1) Focus on audience to avoid becoming a content-spewing zombie

One of the recurring themes in the event was the importance of playing to your audience. That’s not anything new, but it’s hard to understand why you would focus on anything else given the results of the new research. You can’t argue with 88%.

Doug Kessler, Creative Director at Velocity Partners, made the same point but in a more memorable way. (If you ever get a chance to see Doug speak, line up early. You will not be disappointed.) He said content has become the goal for marketers, instead of the means to achieving a goal. Unfortunately, I think he’s right.

Doug gave a presentation on how to tell galvanizing stories. He has a 5-point formula on how to do it. (Everyone has a 5-point formula – even us!) Doug recommended a blog post called “The Greatest Sales Deck I’ve Ever Seen” by Andy Raskin, which helped shape his thinking on storytelling. It’s a good read with great advice. Here’s the summary of Doug’s talk, in five bullet points. 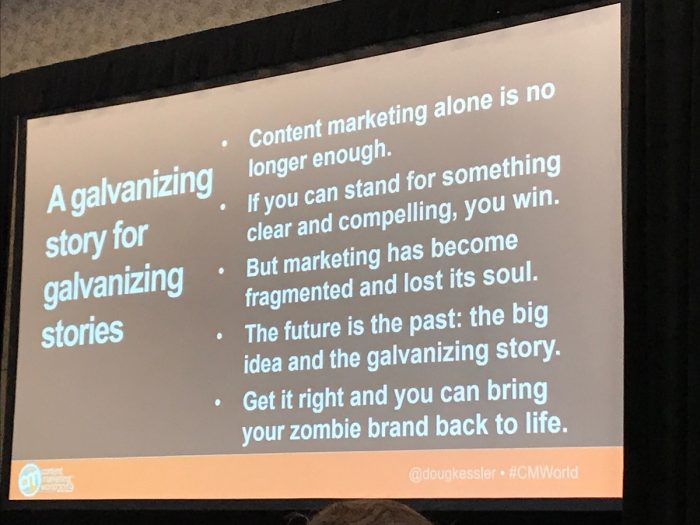 Joe Pulizzi,the founder of the Content Marketing Institute (CMI) and CMWorld, gave his seven tips for content marketing success. He sold CMI a few years ago and is now a free agent. He had very pointed advice on the responsibility content marketers have to get internal buy-in before launching a content initiative. In fact, he said if a content marketing program gets cancelled, look in the mirror to see who’s at fault. 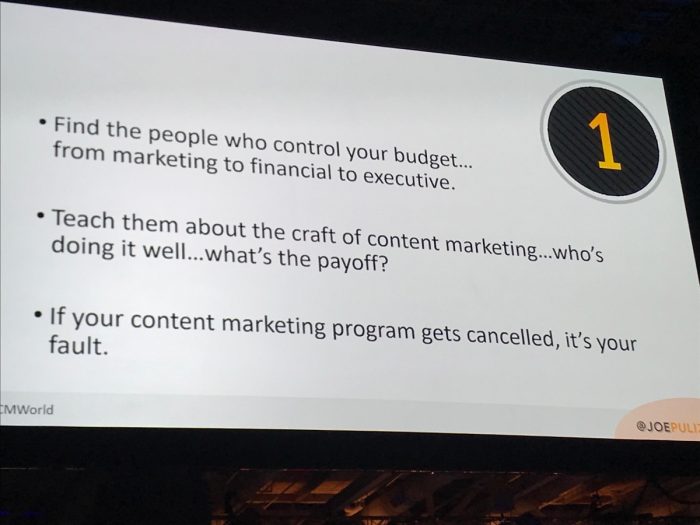 The buy-in advice was the main theme of the conference, at least for the sessions I attended. It was echoed by Marcus Sheridan, aka The Sales Lion, who stressed the need for both the CEO and the Sales Manager of your organisation to understand and endorse any content marketing initiative. Marcus recommended conducting an internal workshop to cover three things:

It sounds basic, but it became clear too many content marketers take a “build it and they will come” approach to getting approval from internal stakeholders.

3) Do one thing remarkably well and ditch the rest

The third overarching theme was to do less, even a lot less. As content marketing matures – and people burn out – the idea of being all things to all people has waned. The widespread wisdom is now to do one thing – or two at the very most – and focus on doing the best job you can.

Frankly, it’s a relief to hear that. One type of content is enough whether it’s a blog, newsletter, podcast or video series. Build your audience by serving up what they want and being consistently in one place. The phrases “stay in your lane” and “swim in your own lane” were probably the most used lines of the conference.

The advice extends to social media, as well. Joe Pulizzi advised everyone to plan for the end of social media. While the platforms aren’t going away, the conventional wisdom is there’s not much social about them anymore. They’ve become commercial entities operating in their own interests.

There’s evidence to prove this. There was very little social media activity at the conference. When you consider there were approximately 4000 people in attendance who would be well-versed in social, that says a lot. I was surprised to make the leaderboard for the first day, especially when I saw I’d only put out two tweets. I wasn’t even trying – and neither is anyone else. Every year CMWorld has at least one headliner as the closing keynote. This year it was Mindy Kaling, who talked about creativity. They always do, and she was one of the more charming celeb speakers they’ve had over the years. (Don’t get me started on the Henry Rollins keynote from the day before. I still haven’t recovered.) Dan and I had our breakout session scheduled on the last day, in the last slot, and were last in the program. It was a little bit depressing until I put on those rose-coloured glasses and realised we were actually the opening act for Mindy Kaling. Here’s proof, right on page 33 of the program. 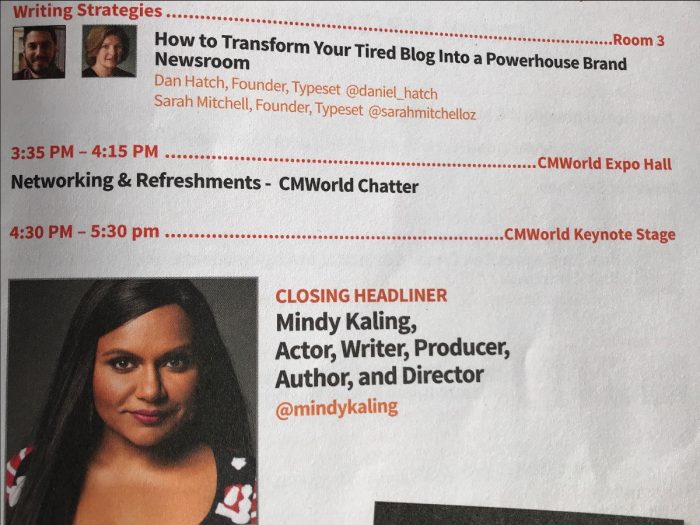 That’s a photo of us presenting at the top of the letter. (Thanks for hanging in this long.) It’s the only photo of us presenting, by the way, because we didn’t think to ask anyone to take photos.  It’s a photo from the only tweet from our talk even though we had a full house and people were turned away. So, the last lesson about CMWorld is to organise your own PR because content marketers can no longer be relied upon to do it for you.